Saudi Government has started many quick and proactive actions with new action plans.

Raising Waste Management & Recycling awareness is one of the examples.

Including others, it is observed that Waste Management specifically in the Holy cities of Makkah and Madina is the biggest challenge.

The Theme of this Workshop was “ Moving the Kingdom of Saudi Arabia towards a more Sustainable and Waste Free Future.” 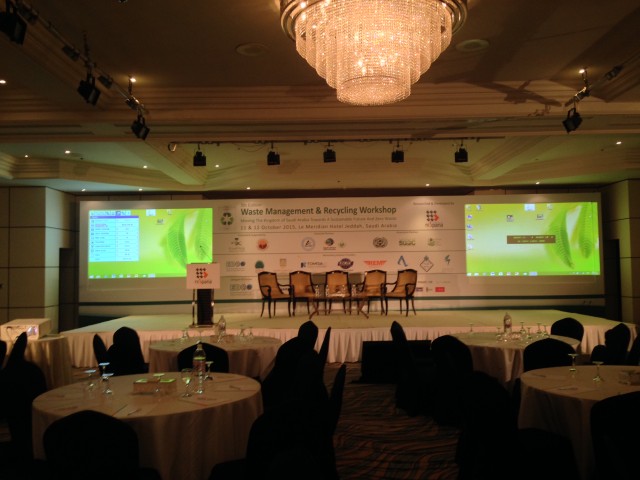 On its first day of the workshop, many types of waste and methods of waste management were discussed. Mainly radioactive waste, explosive waste, chemical waste, medical care waste, pathological waste, construction and demolition waste, plastic waste and food waste broadly discussed. On the second day of the workshop in addition to the waste management, opportunities for recycling, methods of recycling and technical aspects were mainly discussed.

Among others, one of the most serious points of discussions was the waste management of the two holiest cities of Makkah and Madina. Millions of people visit Holy cities of Makkah, Mina and Madina not only during Hajj and Ramadan but for the Umrah throughout the year. Millions of tons of waste generated throughout the year. Not properly managed waste is a serious health hazard and leads to the spread of many diseases including infectious diseases. Some of the dangerous conditions can be the cause of the death (Like plague). Plastic waste is another reason for ill health.

It brought to the notice of participants that the government spent 82 million riyals in 2014 on managing the generated waste. In addition to government efforts, some reputed international companies have their facilities in Saudi Arabia to deal with Waste in a better way. One example is Unilever. Mr. Usman Hassan, who is the Corporate SSHE manager told in the workshop that “with the concept of “Zero Waste to Landfill” Unilever (KSA Division) company is working hard with their business partners.” Unilever has facilities at Mina for the Makkah region to handle waste in a better way.

That kind of efforts to deal with generated waste is in addition to the efforts of Government bodies. Even though there are tremendous efforts at all levels, it does not suffice. The conclusion at the end of the discussion was “ Generated excessive waste should be controlled by taking certain preventive measures.” It can only be possible with the awareness of local public and people coming to these holiest cities from all around the world throughout the year.

In 2014 during the first 03 days of Ramadan around 5000 tons of food wasted only in the Makkah municipality area. Following media reports Mayor of Makkah appealed not to lose such an enormous quantity of food in the holy month of Ramadan.

The food waste mostly generated in the two most sacred cities of Makkah and Madina. There is a very high ratio of food waste during Ramadan and Hajj.

The most shocking report presented for information and discussion was types of waste with its percentage based on the segregation of total collected waste. It was brought to the notice of all participants that out of a total waste percentage of cooked rice was 38.72 and percentage of bakery products were 18.  Another eye-opening truth brings to the notice of the participants was that “25.15 percentage of meat wasted last year.”  It includes meat waste generated at Slaughterhouses. As per the report, more than 2.5 million animals were sold for slaughtering in 2014.

It observed that vast quantity of food wasted due to the lake of Islamic fundamental knowledge. Panel experts advised participants to work for awareness at all levels.  Awareness programs should be conducted to guide Muslims around the world coming for Hajj and Umrah.

In the very emotional request at the end of the session, it was said, “ Awareness is a culture start from our home.”

Participants were advised to take their part to spread this message throughout our people living around the world.  “Being cleaned and not doing waste is one of the fundamental requirements for Muslims. We must follow it.”

Makkah and Madina are the two holiest cities not only for the citizens of Saudi Arabia but all Muslims living all around the world. Millions of people around the world visit those most sacred cities having different cultures and languages. Without supports from international participants, Waste Management will not be an easy task.  Every country participating in Hajj and Umrah must work for the awareness of their civilians coming to the Holy cities for the Umrah and Hajj. Every individual has to take his responsibility and support Kingdom for their efforts to minimised waste.

Few ideas of this workshop are as below.

“Recycling is an Idea.”

“Recycling is an excellent profitable Business.”

“ Awareness is a culture start from our home.”

“ Don’t wait until somebody start, Start it today.”

“ We think this is a waste, but it is raw materials for others that can  convert into Final Products.”

“Waste is a source of useful materials.”

For more details, please refer attached documents &  Published reports in the Saudi Gazette covering few sessions on the first day of the workshop (October  11, 2015). Please click on below link to read it.

Report prepared by Nasirhusen A. Lotiya from Jeddah who participated in this workshop as a “DELEGATE” representing his company as a “Quality Management Professional” in this Workshop.

“It is the greatest of all mistakes to do nothing because you can only do little- do what you can.”

” There are many in the world dying for a piece of bread.”

” Find out how much Allah has given you and from it take what you need; the remainder is needed by others.”

“ Waste is a source of useful materials and recycling is an excellent profitable Business.”